Days on the True Love don’t get much better than yesterday. We headed out from Erasmus Island heading south for warmer water. The Captain wanted to go on a hunt for wildlife and the First Mate was fine with that plan as long as we had a specific end goal in mind.

Our original goal was Pendrell Sound where the waters are the warmest in Desolation Sound. 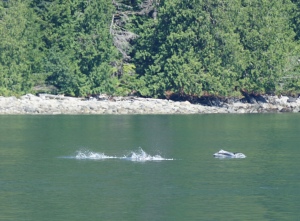 Within an hour of leaving we ran into a large pod of about 50 dolphins near Fredrick Arm (just south of Dent Island) and we hung out with them for quite a while taking pictures and video. 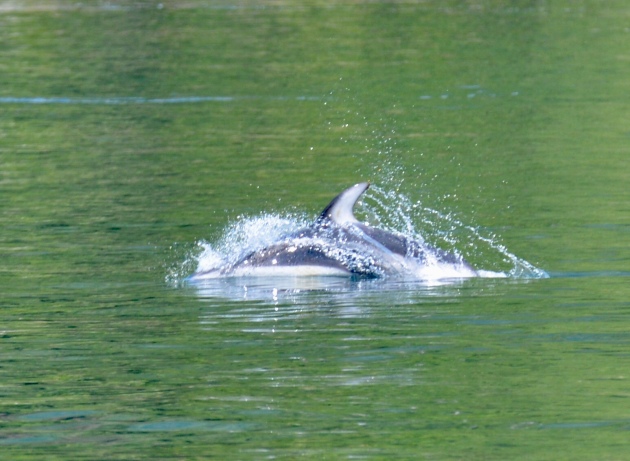 Because of our great experience with the dolphins we were late to the Dent rapids and they were in full boil running at over 7 knots. The more youthful Captain and First Mate of the True Love would have plowed right through with no doubt that their two big 375 horsepower engines would charge through the rapids without a problem. The more wise and seasoned officers of the True Love, however, understand that we live in a quantum theory world of Schrodinger’s Cat theory where equipment can work and not work at the same time and you don’t really know which it is until you enter the rapids.

So we turned off the engines in the bay north of Dent and peacefully floated for a quiet lunch, listening the roar of the rapids. Our patience was rewarded with another interaction with the large pod of dolphins. More pictures and video!

After the rapids calmed down and the dolphins moved on we made our way through the rapids without incident. We were monitoring the chatter from the whale excursion boats and it appeared there were orcas near Toba Inlet, the correct direction for us, so we continued to head that way.

On our way we saw a lot of eagles at Jimmy John Island (near Big Bay on Stuart Island). 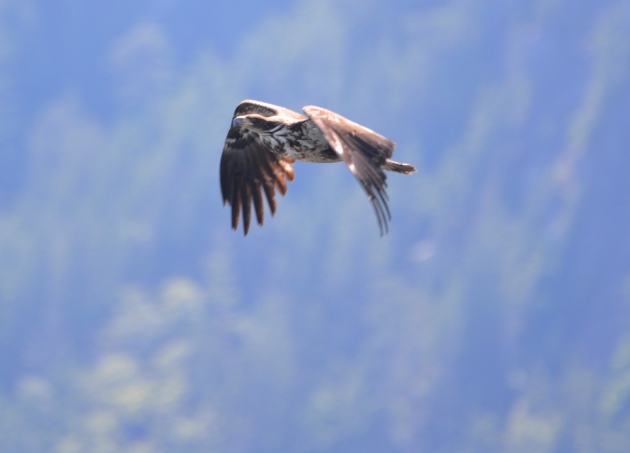 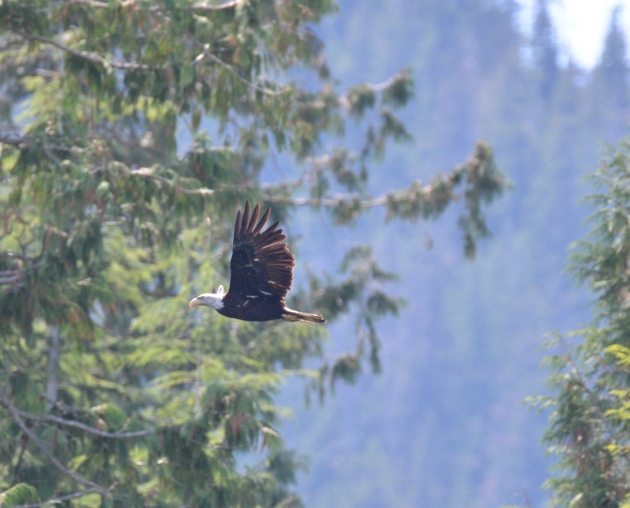 As we got close to the reported sighting of the orcas, a tour boat zipped by. We decided to speed up and follow the tour boat and we were rewarded with a long interaction with a big mother orca and her two babies. 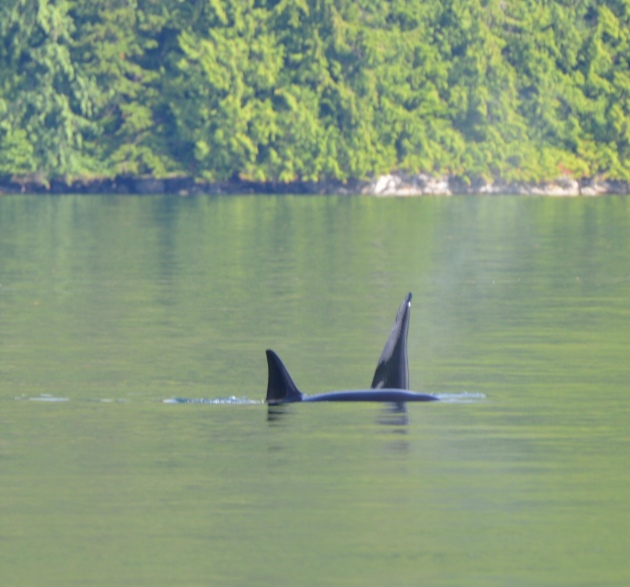 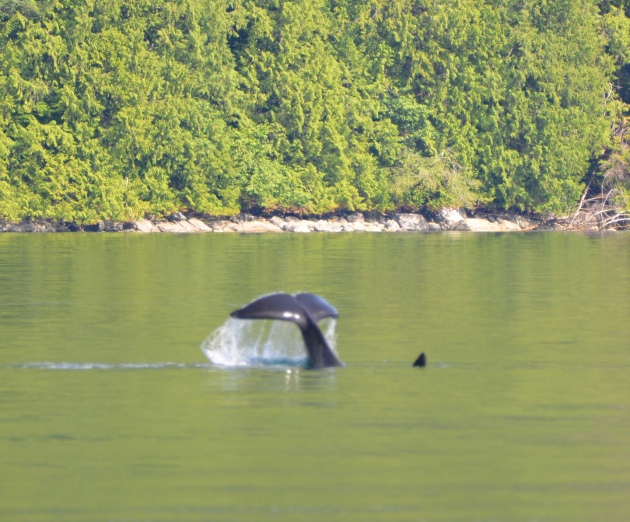 The Captain even spotted a very scared seal quietly hiding in the rocks on shore just above the waterline. 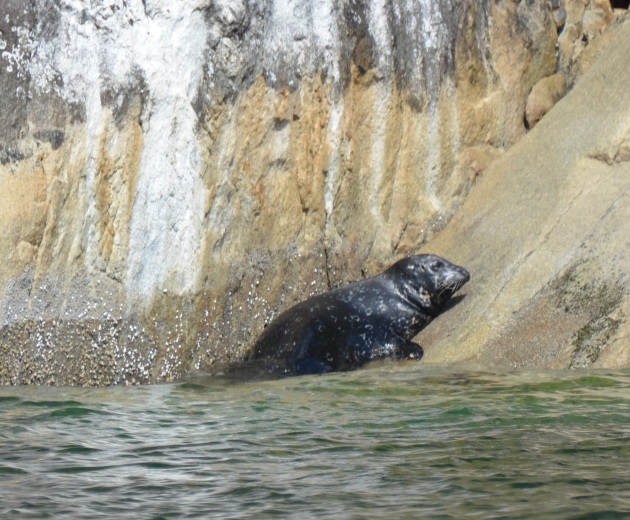 It was one of those happy National Geographic moments where the prey was scared, but spared. 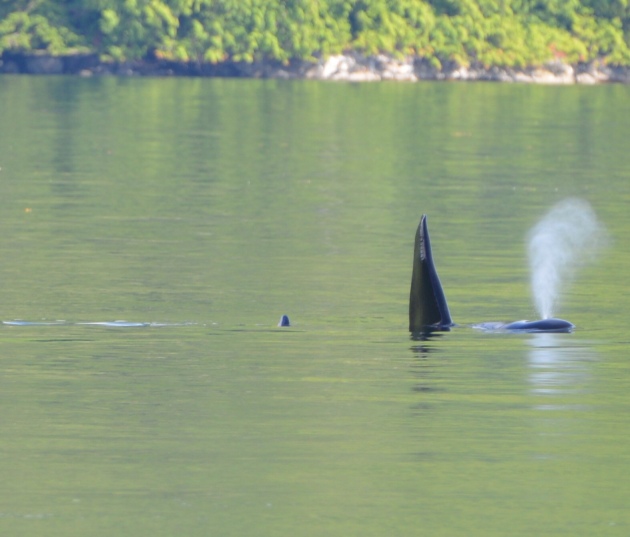 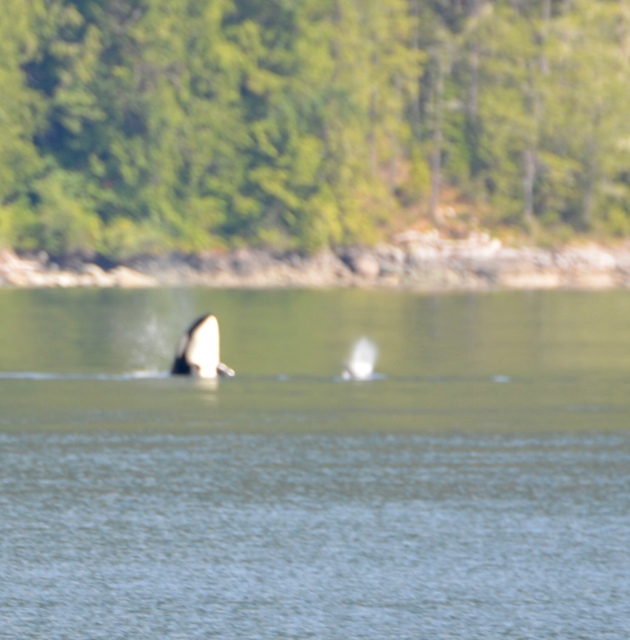 While following the orcas south down Homfray Channel the First Mate consulted the Waggoner book to see if there was an alternative place to anchor. We were right near Forbes Bay which looked beautiful and the book had a short mention of someone successfully anchoring there. So we decided to give a try. We investigated a couple of options and decided a deeper than usual anchorage, (100 ft) at the head of the bay with a glorious view of the mountains and sunset. The water is 72 degrees and the air is perfect. Furthermore, we were the only boat here, once again alone in paradise. 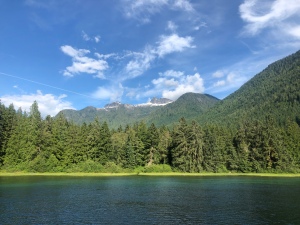 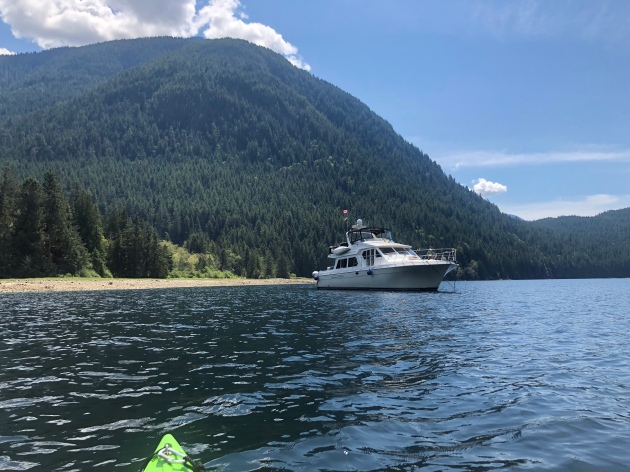 James and Robert we thought a lot about you two today and can’t wait to share all the orca and dolphin fun with you on the True Love!

The skies were clear and the new moon set during the day, so we planned on getting up in the middle of the night for our first star watching of the trip. The stars were bright and the milky way was clear in the sky. We saw lots of satellites, a few small shooting stars, and a faint, pulsating object we call a UFO.

Before heading back to bed we turned on our new underwater lights. Clearly these are an unnecessary piece of equipment, so they worked beautifully and the fish and other sea creatures gathered to the light.

We thought we were going to make a full 24 hours without an equipment issue, but that was not be. As we were heading back to sleep we heard an annoying ticking sound. The First Mate had heard it before, but the Captain had not. Nondescript sounds on a boat are hard to track down. This one was clearly coming from the lower levels. But we sleuthed it out. It’s a thru-hull of some sort that has a crazy warning sign. We found it under a hatch under our storage area. But thankfully the sound can be turned off by turning off the “electronics” fuse from the fuse panel at night when we are at anchor. We have since found out that it is the sonar.

But, on a good note, the radar which disappeared again this morning after turning off the electronics last night, reappeared as soon as we turned on the generator. It appears to be related to the voltage issues as expected.

Our morning in Forbes Bay was lovely and we enjoyed a long kayak and paddle board. 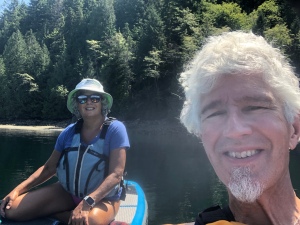 The next day we headed to Pendrell Sound, but it was unusually windy. So on Tuesday we headed out to get some cell service and see if our repair part was coming in on Thursday at Campbell River.

As soon as we had cell service we got a message that we were on for Thursday for our “final” repair. Woohoo!

We had a day to spend somewhere so we headed to Okeover Inlet and tried to get a reservation at the Laughing Oyster restaurant.We’ve never had the time to go there and boy it is a must stop. Our dinner was marvelous! 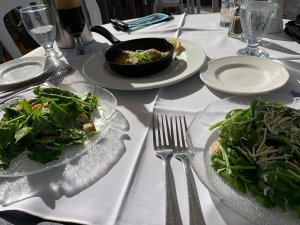 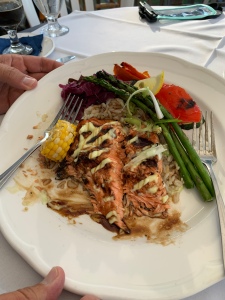 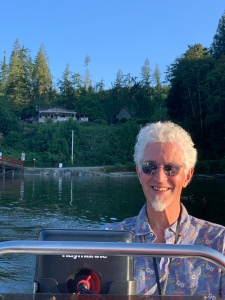 Today, we are heading on to Campbell River. But first we made a stop in Lund to visit Nancy’s Bakery and fill up with goodies to sustain us for our voyage north. We are still hopeful that after our repairs tomorrow we will still have time to cross the Queen Charlotte Strait north of Vancouver Island and explore Fjordland and the Great Bear Rainforest.

Just before I finished this blog we spotted a humpie. And it surfaced right next to the True Love! The photos have a silvery, black and white look because of the overcast sky. I really like the look. 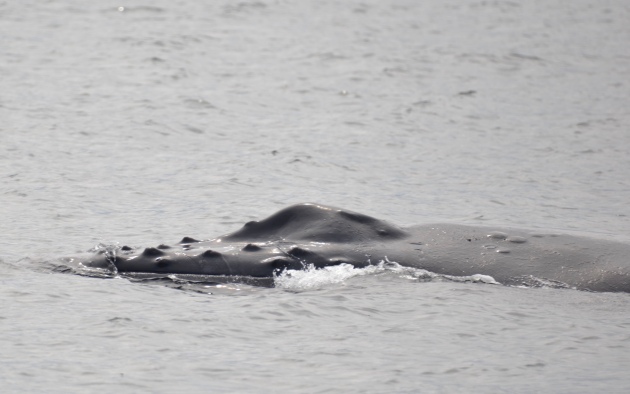 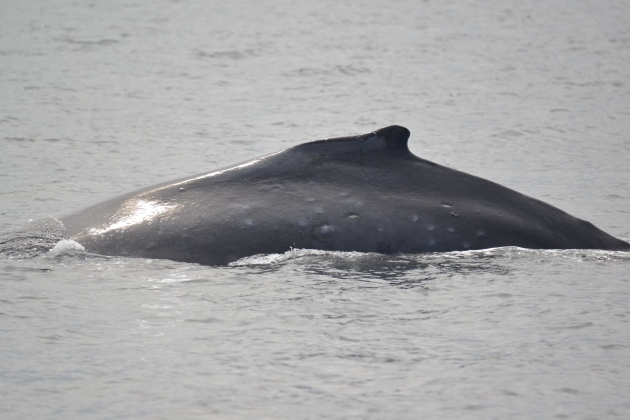 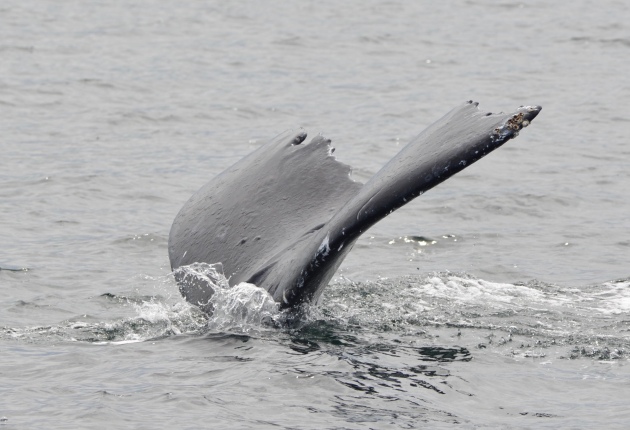 The Captain and the First Mate of The True Love

“The slipped briskly into an intimacy from which they never recovered.” F. Scott Fitzgerald

2 thoughts on “Dolphins & Orcas Lead us to the Perfect Anchorage”