Tuesday we arrived at Dent Island.  Saul and his videographer Mike Rivera flew in.  Our goal is to capture some film for a potential movie project.  We planned to capture the majesty of the mountains and fjords of the area.  I’ve always been worried about the potential winds and rains, but previously I was never worried about being smoked out.  As many of you know who are in Seattle the strong winds from the north have been blowing the big BC wild fire smoke south and west.  Truly unusual.

The smoke filled every inlet like pipelines from the interior, ereasing the fantastic mountain views.  However the area was still teaming with wildlife, so we changed our filming plans.  The entire Pacific Noorthwest has had a infusion of humpback whales in the last few years.  Monitoring the VHF radio is extremely handy and we heard the fast tour boat guides chatter about all the “humpies” nearby.  So we went on a whale hunt.  As anybody knows who has gone on whale watching tours just because they are “nearby” doesn’t mean you will see them.  And just because you see them, it doesn’t mean you will see anything more than a spout in the distance.

We encountered a humpback and hung around with him as he leasurely meanandered in the water, surfacing for about 1 minute every 8 minutes.

And then the magic happened.

Our whale put on a fantastic cleaning display, slapping every part of his body, launching himself out of the water 11 times in a row, and repeadly slapping his big side fins.

And Mike captured lots of it on video and photos.  I wasn’t shooting photos at first, but then just took in the whale show and let Mike do what he does so well. 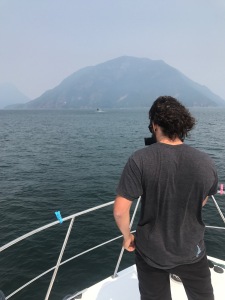 Mike also got some great sea lion film of an interesting heard activity, but I don’t have great photos, but Jim got one. 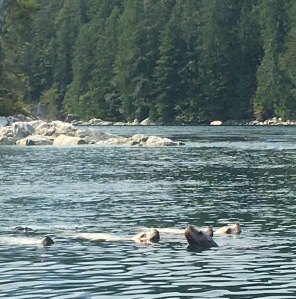 Add in the eagles and the day was complete. 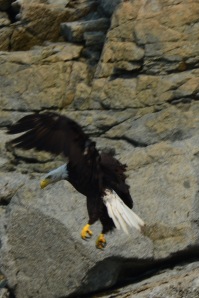 Yeterdat, we anchord at Octopus Island, another one of our favorite stops.  Chilled and did some kayaking.

During our morning meditation we heard splashing .  I assumed it was a seal but Jim peeked and it was a mother deer and two Fawns swimming in front of the True Love between islands. Edit 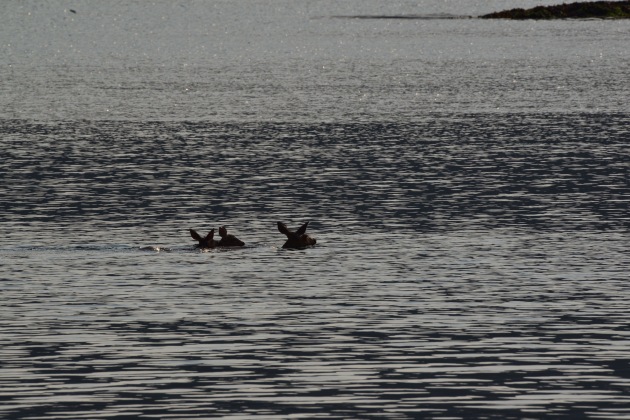 I’ve only seen deer swimming like that once before a few years ago. 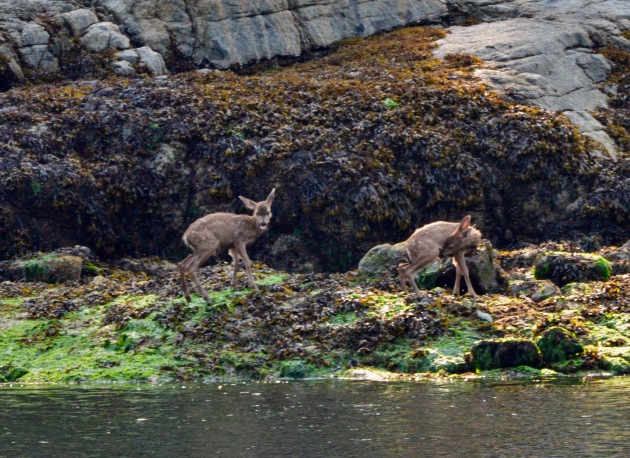 Interestingly, Saul was onboard then too.

We spent the day yesterday doing some more filming of the area and the rapids and searching for whales with no luck before dropping Saul and Mike off at Dent for their seaplane ride home.

Our first blog didn’t include some of the really fun photos of Gail and Peter’s visit in Princess Louisa inlet where the water was so warm, 76 degrees, you can float peacefully.   We were so lucky to get that magical week there with no smoke. 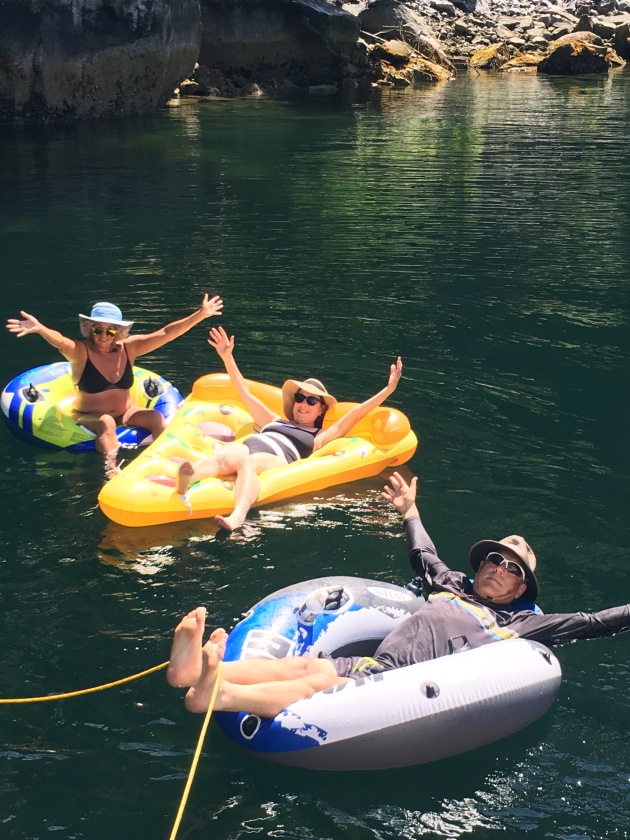 That’s where we are now.  As we headed to our anchorage for the night the smoke briefly rose and cleared for a view of some of the nearby snow capped mountains.

The smoke is back this morning, but at least the smoke is high in the sky. Crawford anchorage is a favorite of ours, near Blind Channel. Quiet and peaceful, only us, with a quick dingy ride to the Blind Channel resort (a special little family run oasis in the wilderness) with a restaurant and hikes.  We plan to spend a couple of days here enjoying the area before heading south and back to Seattle.

EditThis afternoon we took the short hike from the resort to the 800 year old cedar tree.

We’ve seen it once before but it’s always a “must visit” when we are here.  On the path we saw the most amazing bright orange fungus that looks like large flowers.  The sunlight through the smokey sky bathed the forest in a lovely golden hue.  As The Captain said, this was “the silver lining” to the smoke.

While we used the limited wifi and drank a ginger beer on the lovely grassy area at Blind Channel resort I had one the most amazing interactions with the precocious 5-year-old daughter of the Richter family who own the resort & live there year round.  This adorable nature child with  blond hair was walking by me with a grasshopper perched on her outstretched arm. 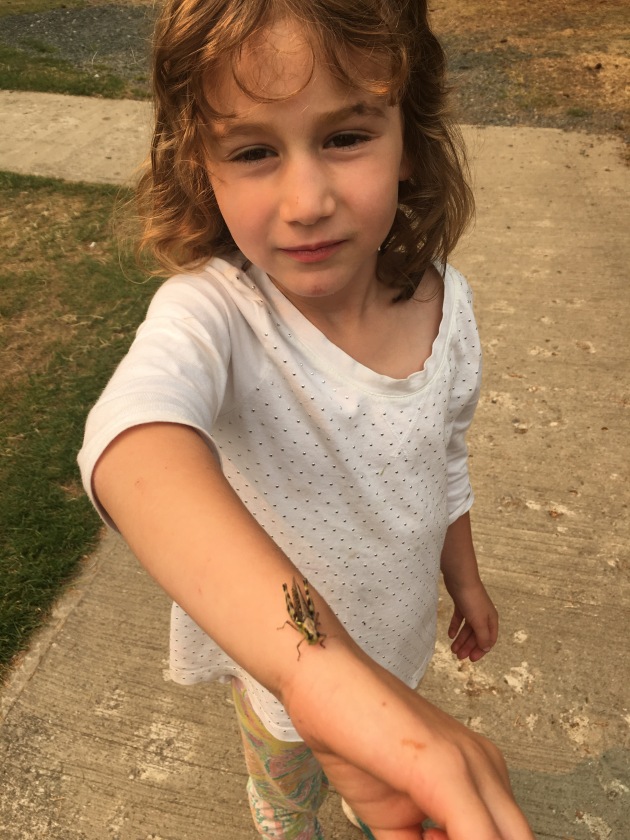 I asked her if I could take a picture of her and her cricket.  She corrected me sweetly that it was a grasshopper.  I told her it was very cool and she replied,  “Yes, but the we are having some trouble becoming friends.” She was so adorable!  Ahhhhhh pure joy.  And her 9-year-old brother was in constant motion, running.  Often with his sister following behind trying to keep up on her bike.  Next year this will be a great stop for the kids.

Between our fun guest visits and our more adventurous and tiring crossings we’ve really have been “in the moment” most of the time, meditating every day and generally doing very little.  It’s a first for me.  I can see now the appeal of a monastic life.  It certainly is a path to deep peace and spirituality, although it is not in my nature to do that all the time.  There is too much to give up: love making, children, creating, inventing etc.  Jim and I must be more active doers.  But this is a nice space to visit.  And we plan to do it more!

The smoke came back in, which made for some pretty sun and moon shots.

It’s gotten cold, so we decided to head south.  It’s still smokey, but we are at one of our favorite anchorages on the south end of Lesqueti Island.  It’s perfect in calm conditions.  The area is teaming with wildlife and it’s a great for kayaking.