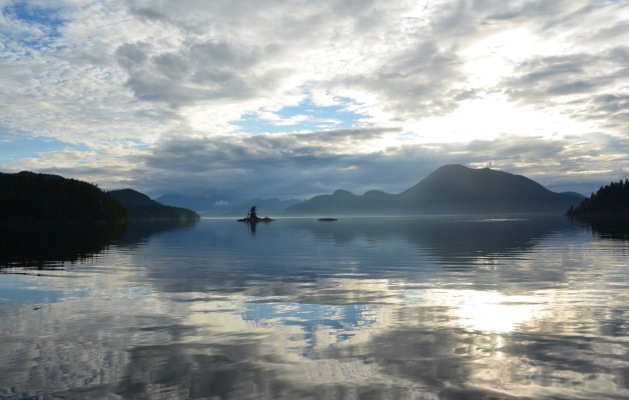 We said goodbye to Greg and Carolyn at April Point and then we had a few days to explore on our own before Robert and Sharon flew in to meet us at Dent Island.

After reprovisioning at the little local grocery store the night before, we woke slowly and were having a hard time motivating to leave, but the Captain checked the latest weather forecast:  the next two days were supposed to be calm in Johnstone Strait, the morning fog was clearing and we still had two hours left before the strong tide in Johnstone Strait would turn against us.

So we left the dock as quickly as we could and headed out to explore the strait in the unusually calm weather.  We have traversed Johnstone Strait only twice, because Gale Force winds blow through there almost constantly, and when we do attempt the passage, we have always cruised through as fast as we can without stopping or lingering because the strong winds can return quickly, generate large waves and make your time there very unpleasant.  This was a fun change.

The first night we anchored in Otter Bay, near Chatham Point.  It wasn’t perfect, but it was calm and a good place from which to venture out into Johnstone Strait and try our luck at some fishing in the salmon-rich waters.  Sadly, our pitiful fishing continues.  It took us an extremely long time to gather all of our gear for the first time this year.  Once out, we tangled our lines and the fish took our bait, twice.  Oh well.

Unfortunately, the weather didn’t clear and it was rainy and foggy the next morning.  This year’s unusually cool and wet summer weather was beginning to get to me.  Around 1 pm, after the fog finally cleared enough to resume our exploration of the still calm Johnstone Strait, we heard on the VHF radio about an orca nearby at Ripple Point (which we had been told was also a good place to fish directly from our boat rather than from the dinghy).

At Ripple Point we didn’t see any orcas so we decided to fish.  Within a minute of baiting our lure and dropping it in the water Jim heard the deep exhale of an orca less than 30 feet away. So much for fishing!  We grabbed the camera and enjoyed some quality orca time.  This orca was a loner and looked like it had an injured fin.  I emailed the photos to the local authorities so that they can help if that’s possible.  They replied right away, identifying the orca as “T-002C”.  He became separated from his family about a month ago and is now traveling with a new pod.  The problem with his fin is because he has scoliosis of the spine. 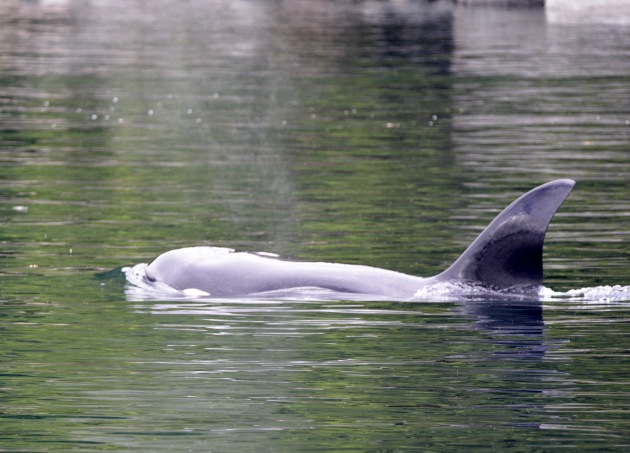 After our orca time we set of it for our next anchorage at Thurston Bay.  We had been here many years before with our first  boat.  It’s an awesome kayaking area with a very lovely sunset view, as you can see from the photo at the top of this blog.  It also has the beautiful little island below. 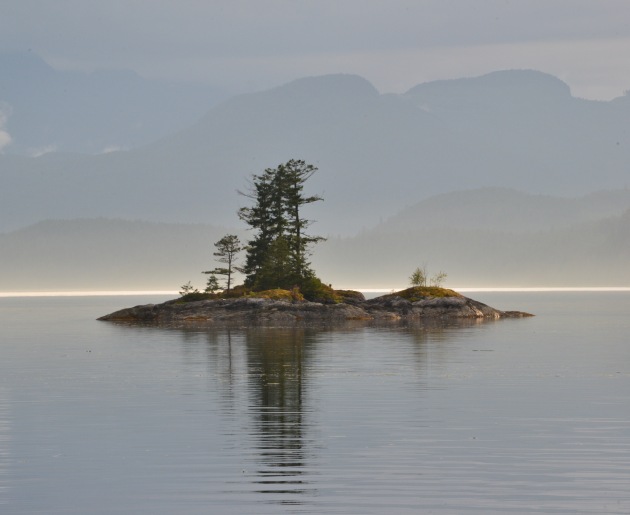 The next morning we woke to sunshine.  What a nice change!  But I still got a fun photo of some light fog lifting near shore. 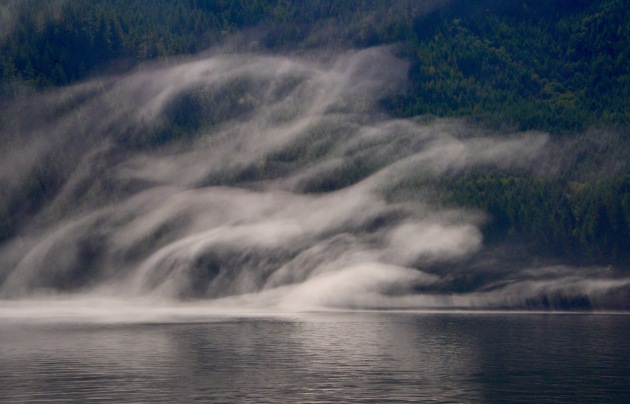 It finally felt like summer had arrived and our cruise to Dent Island for our rendezvous with Robert and Sharon DeWolf was fantastic. 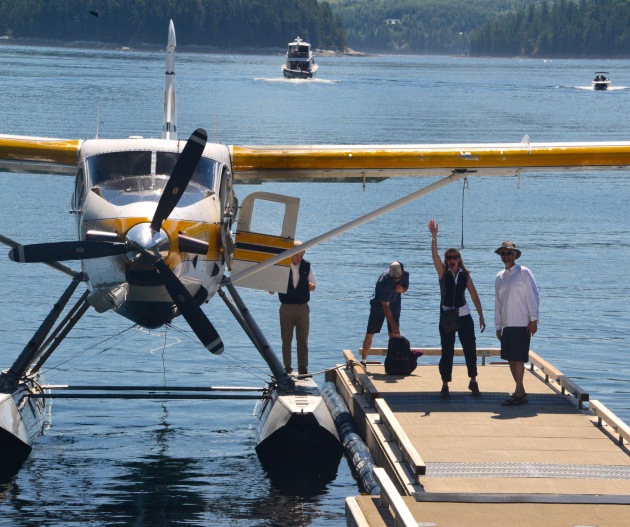 After a quick tour and lunch at Dent we all decided that we should go up Bute Inlet again.  It was a perfectly sunny, calm cruise going in and we decided to try anchoring at the very end of the inlet this time because of the calm winds.  Although Robert is a kayaking Jedi Master, he has never kayaked Bute Inlet and we knew both he and Sharon would be blown away by the beautiful mountains and glaciers of this Canadian fjord.  They were. 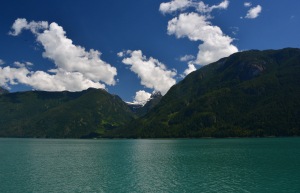 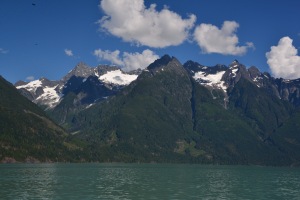 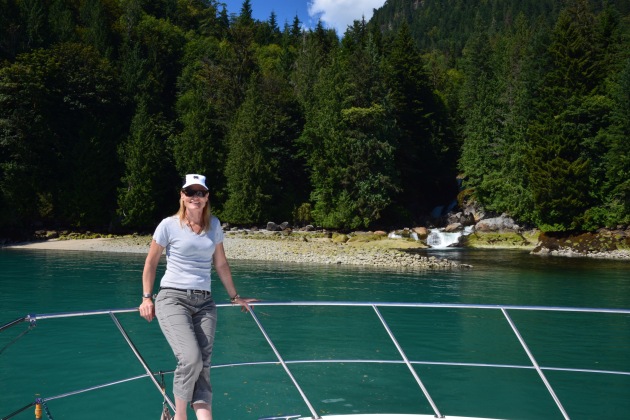 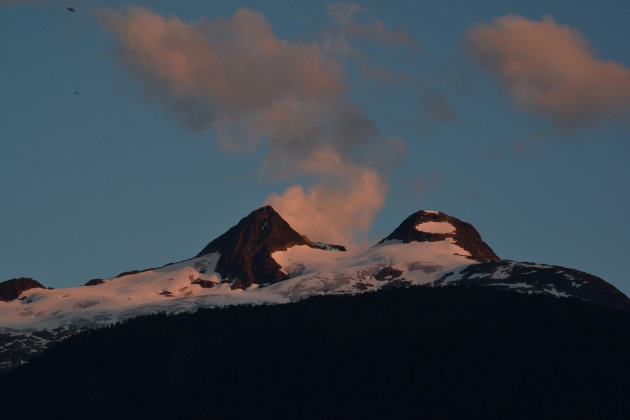 The next morning was a bit windier, but Robert and I went out for a kayak while Jim and Sharon explored using the tender.  Our calm time ended shortly after that and the wind really kicked up.  Time to leave.  The cruise back was less relaxing, but manageable.   Robert took the helm for a while doing a great job searching for logs hidden in the waves. 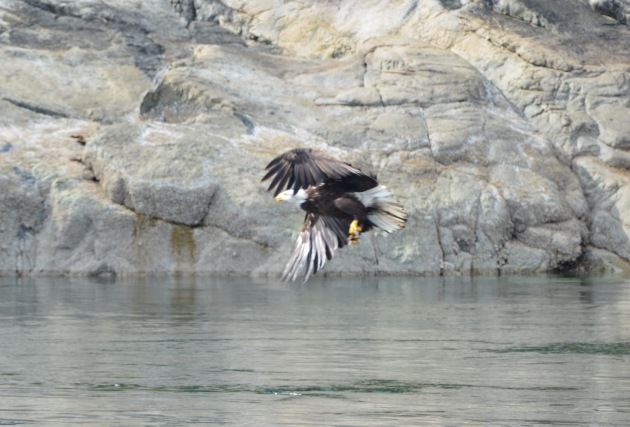 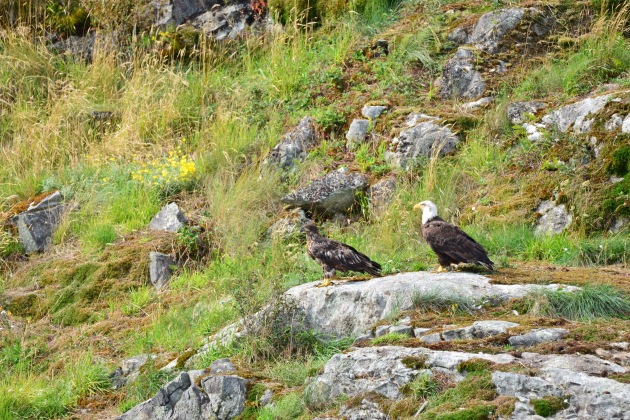 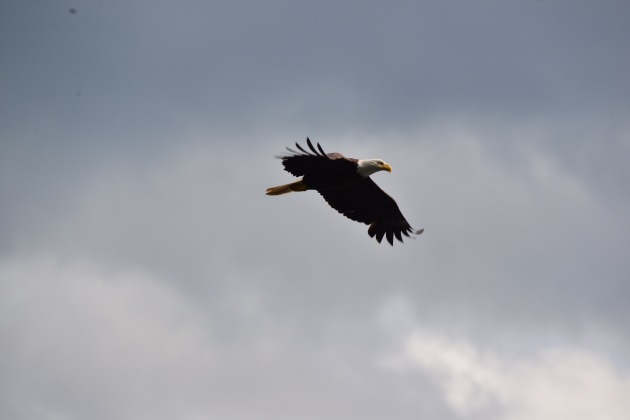 The timing was right for another eagle show at Arran Rapids and we weren’t disappointed. Once again we anchored at Octopus Islands after going through the tidal rapids at “Hole In The Wall.”  Robert had been through here on kayaks before and really enjoyed the return on the True Love.  Seeing all this was a first for Sharon and she loved the beauty we were all sharing together.

Sharon has been so important in helping the Captain stay strong and healthy.  She is a chiropractor and a natural healer and we were so glad to thank her by sharing this beautiful place and nurturing her a bit with good food and conversation.

We anchored at Octopus Islands around 7 after a long but amazing day, enjoyed a great meal and then Robert suggested we all watch a DVD.  He picked out Rear Window from our selection on board. It’s such a great movie and it was a kick watching it together.

The next morning during breakfast I noticed two local tour boats going by so we turned on VHF channel 7 and heard the tour boats say to each other that 2 orcas were nearby. We quickly finished our breakfast, deployed the tender, and motored south about 20 minutes to the other side of Surge Narrows where we found the 2 orcas (including one that was very large) and 4 tour boats.  It was sunny and warm, the orcas were playing and I even put my feet in the water which was a first this trip. 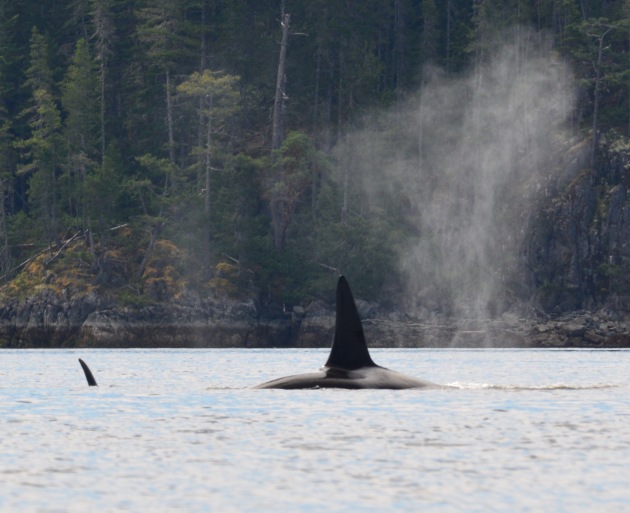 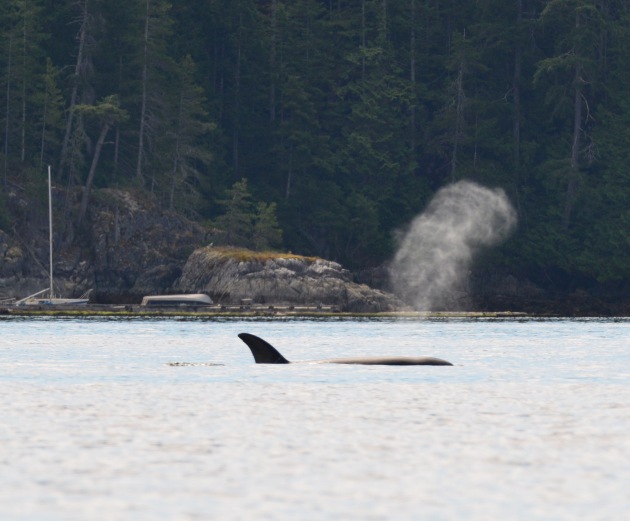 When we got back Robert and I got a final kayak in before we headed back to Dent to get them to the seaplane for their flight back to Seattle. 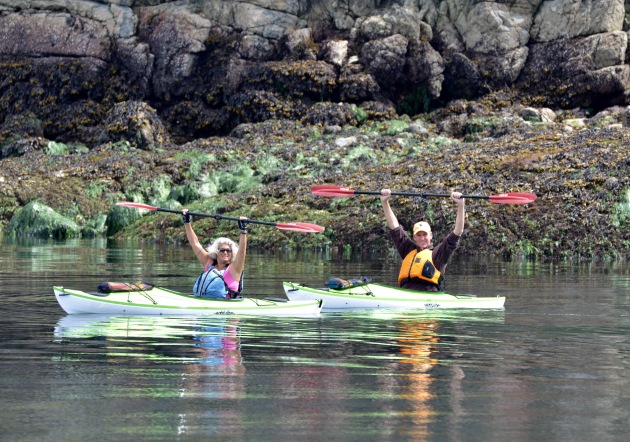 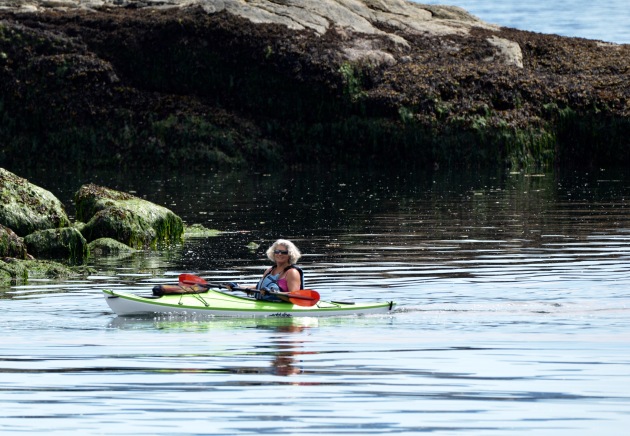 The tidal rapids near Dent Island were very strong as we approached and for a short time we were barely able to make headway through the swirling, churning waters and whirlpools between Big Bay and Jimmy Judd Island (aka Eagle Island).  At one point the water had 20 foot elevation changes in the current.  Alas, no photos we were all too enthralled. 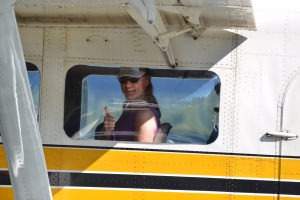 Last night Jim and I did some ceremonial eating at Dent’s very nice restaurant.

Today we begin our journey home.  Who knows what adventures we will experience over the next week. Maybe we will even catch a fish?

The Captain and First Mate of the True Love.

3 thoughts on “Johnstone Strait is calm?  Crazy but true!”