As I write this summer’s first entry of True Love Adventures we are anchored in Boughey (pronounced “Boogie”) Bay in the Broughton Islands, which are a remote and beautiful group of islands on the N.E. side of Vancouver Island in the Canadian Pacific.
Given our longer-than-usual timeline for this vacation, we hoped we would be able to make it as far north as the Broughtons. We’ve made it up here once before, in 2011, but the weather was pretty bad and we didn’t have time to fully explore these islands. So, I was drawn to return to the Broughtons this year, weather permitting.

We began our trip north from Seattle with our longtime friends Jeanette and Brett Newman. There is something so special about spending time with old and dear friends. Now that Jeannette & Brett live in Sonoma, we don’t get to see each other often, but our time together was, as usual, easy, calm and authentic.

As we left our Seattle homeport, Elliott Bay Marina, on Friday July 10th, an eagle sat on the marina’s outer breakwater as if to wish us a Bon Voyage. We cruised north about four hours to our usual spot at Fort Flaggler, across the bay from Port Townsend. From there, we took the dinghy into town for a walk and delicious dinner at the Sirens Tavern before returning to the True Love for a pleasant evening of conversation.
The next day (Saturday), we had an easy, although somewhat foggy, passage across an almost perfectly calm Strait of Juan De Fuca to the San Juan Islands. We anchored at Turn Island, just outside of Friday Harbor. We hadn’t anchored at Turn Island for at least 15 years. That was our first “cabin cruiser” experience when we borrowed Jim’s brothers’ old boat, affectionately nicknamed the “WallyPop” and took our “tween” children up there for a really fun family experience together. I guess that was a foreshadowing of our love with boating.
On Saturday afternoon, we walked around Friday Harbor before Jeannette and Brett took us out to another yummy dinner, this time at the Coho Restaurant. On Sunday morning, the women took a walk around Turn Island while the men circumnavigated the same little island in the dinghy. Because we were running a little late, we used the dinghy to take the Newmans to Friday Harbor for their one-hour seaplane flight back to Seattle. 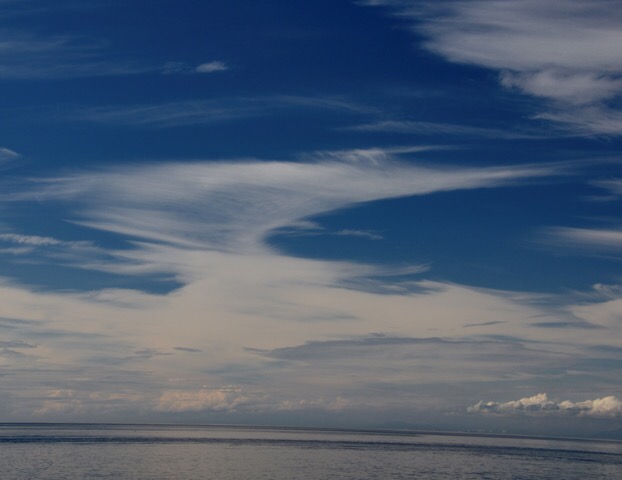 Then it was time to head north to Canada. It was a beautiful, sunny, cloud-watching kind of day. We thought we were going to spend our first night at little Reef Habour (Canadians spell “harbor” with a “ou” instead of an “o”), between Cabbage and Tumbo Islands, just a few miles west of Patos Island, the most northerly island in the San Juans. This was one of our favorite stops at the end of our summer cruise last year. But this year it was too crowded, so we kept cruising north toward Montague Harbour, which is much larger and can always accommodate another boat at anchor.
As we were cruising up the west side of the Strait of Georgia, heading for the main entrance (Active Pass) that connects the Strait with the more protected waters of the Southern Gulf Islands, we approached Boat Passage, a much smaller entrance, just as the high-tide slack was occurring (when a rising tide peaks, just before it begins receding). Our reference text told us that this little used entrance to the Southern Gulf Islands was doable during high-tide slack so we decided to look at it and ultimately gave it a try.
We made it without bumping into anything, but we completely agree that the only time to use this narrow, winding passage is during a high-tide slack, when the depth is at maximum and there is no current.

Montague Harbour is a great place to watch sunset especially if you anchor on the less sheltered northern side of the outer bay. This year we were a little concerned about weather so we anchored in the south side of the inner bay but were still treated to a spectacular golden sunset.
Genuine and authentic are our themes for this year. We have been through a great deal since our last summer cruise through Canadian waters on the True Love.
As some of you already know, Jim developed an unusual weakness in his left leg last summer, which led us through a nine-month medical odyssey of spinal MRI’s, PET scans, lumbar punctures, a probable diagnosis of spinal cancer, a living-with-cancer mindfulness retreat (that was the transformative “silver lining” to the whole medical odyssey), a last minute trip to Israel (documented in the previous True Love Adventure blog) during which Jim became significantly stronger, which led his radio-oncologist to say it was now very unlikely that Jim ever had spinal cancer. For example, while Jim could barely walk two miles in the spring, he can now walk 6 miles! In fact, we were recently able to do our favorite local hike to Snow Lake (while six months ago Jim couldn’t even do the easy first half of it).
While that was going on I have been working to help my amazing sister overcome her addiction to prescription pain meds. We are so proud of her! She is doing everything she needs to do to rebuild her life and return to full mental and physical health. Her journey has also been about being genuine, truthful and authentic.
The last year has been about growth, healing, setting boundaries, making important choices and meditation. We now begin our days not with the TV but with fifteen minutes of meditation. Calming healing breath in . . . tension out. It’s an amazing way to start your day!

Now that I have a healing husband and sister, I felt free to go north again on our boat and explore.
After we made our way to Nanaimo for our annul yummy Greek dinner at Taverna Astera we analyzed the typically cryptic weather forecasts for Johnstone Strait: the narrow, windy passage that is the only way to get to the beautiful Broughton Islands without cruising 200+ miles in the open ocean. Could we get a few days of lighter-than-usual winds to allow us to get through Johnstone Strait to the Broughtons?

The weather forecast Monday night was for light winds north of Nanaimo on Tuesday and relatively light winds in Johnstone Strait (15 knots) Wednesday morning. It looked like we might have the weather window we needed.
Unfortunately, when we awoke Tuesday morning the winds were unusually strong in Nanaimo blowing from the Northwest. It seemed unlikely that the winds farther north were actually “light” as forecast. Undaunted, we headed out of the harbor for the Strait of Georgia (although we made a contingency plan to bailout to another protected anchorage if the weather report was wrong). When we left the dock our fellow boaters were surprised that we would leave the protected harbor with the winds at the dock were already so strong.

It was a long 10-hour, 80 mile cruise to Campbell River, but fortunately the winds were relatively calm after we got 20 miles north of Nanaimo, perfectly calm the last 20 miles, and the sun shone brightly almost the entire way!
We arrived at Campbell River around 8PM. The main marina at Campbell River was full so we had procured by phone a space at the smaller Fisherman’s Wharf marina to stay for the night. Because of our late arrival, the marina office was closed when we discovered the dock space they assigned to us was impossible to get to without bumping into other boats. So instead we simply docked at another, more accessible dock space amongst the tugboats at the end of the pier and hoped the tug that usually moored there was not coming back in the middle of the night.

After a yummy omelet for dinner, we both slept well until our alarm sounded at 4:40 AM to remind us that this was the time we needed to leave to ride the ebb tide north and enjoy the forecast light winds on Johnstone Strait. Across the dock a tugboat captain was readying his boat for a day of work on the water. He liked our boat and wished us well. It felt like a good sign.
As the sun rose another boat made its way out of another moorage to join our little procession up Johnstone Strait.

We got lucky: the winds were light and the sunrise was peaceful and beautiful. On our way north we spotted the Caper (Gabby and Gillian Barlow’s boat). They were heading south making their way home from Alaska. We hope to make that same journey some day. We talked over the VHF radio, took pictures of their beautiful yacht as it passed and continued on our journey north. Five hours later, around noon, we turned into Havannah Channel and the sheltered channels, inlets and bays of the Broughton Islands.

Needless to say, we were pretty tired, so we decided to anchor almost immediately, here at Boughey Bay. We ate a quick lunch, drank a glass of celebratory champagne and then took a well-deserved nap. The rest of the day was warm and beautiful. We read, did our exercises and enjoyed interesting conversations.

Jim was reading about the 60th Anniversary of Disneyland and how Walt Disney knew it would never be “complete” because it would always evolve and change. This led me to say that truly iconic businesses or brands have a “soul” that changes, evolves and improves over time. It doesn’t take away from the original idea or the original business. But a truly great business, over time, develops a “soul” that guides it as it continues to grow and achieve its fullest potential in serving its customers, employees and community.
The sun sets 30 minutes later this far north (around 9:30 PM during our trip).

For dinner I made coleslaw, steak on the grill and roasted peppers. After a well-fought game of chess, we went to sleep only to wake to find a very low tide. We truly had anchored at just the right spot. Twenty yards further back into the head of the bay and we would have been on dry land. Oh well; no contact, no foul!

As we head out for our first full day in the Broughton Islands, we can feel ourselves relaxing, and our creative energy renewing, as we surround ourselves with nature’s beauty and the peaceful tranquility of cruising among coastal mountains, through protected channels, fjords and inlets.

2 thoughts on “2015: a year of uncertainty, fear, growth, mindfulness and adventure”