The last 2 days we have been guided through the old city by our Master Guide (and now dear friend) Ari Ram.

I think it is virtually impossible to understand Jerusalem without experiencing it in person and with a good guide.

Over the last week we have experienced Jersualem in depth, both casually and intensively.  It’s such a complex place where you can feel all the good and the bad, from ancient to modern times, swirling around you. Among the many things affecting you as you walk through the Old City are:   (1) the underlying  tension and mistrust among the various modern religions and tribes; (2)  the flood of tourists & pilgrims sweeping through narrow streets, about half of whom are smoking;  (3) the cars which are allowed, unbelievably, to drive down any street that is barely wide enough for a car;  the countless little shops every 15 feet, most with salespeople at the street bombarding you with a sales pitch honed over the ages in the crowed walkways.  Mix it all up with the crazy, often counterproductive, Israeli, Palestinian & International politics and you get a sense of what it’s like to walk the streets of the Old City today.

Yesterday, we focused on the Via Dolorosa (“Way of the Cross”), the path taken by Jesus in Jerusalem from condemnation, to crusifiction, to burial. 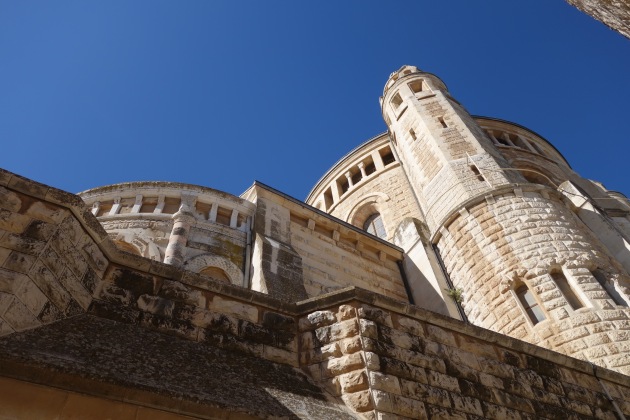 We entered the Old City at the “Zion” gate where there is a single building that houses a synagogue on the ground floor, an Armenian Church on the second floor (which claims the Last Supper was held there) and a Mosque Minaret on the roof.

Now for a political interlude.

It’s important to remember at this time that a mere  67 years ago, when Jordan took the Old City of Jerusalum in 1948 after Israel was invaded immediately after it was granted Independence by the UN, Jordan destroyed all of the Jewish synagogues and homes and expelled all the Jews who live there and in East Jerusalem.  Israeli Jews were forbidden to enter the Old City for 19 years, when Israel reclaimed the Old City and East Jerusalem as part of the Six Day War in 1967.

Did Israel then expel the Muslims and destroy all of the Islamic religious sites?  Of course not.  Although Israel has controlled all of Jerusalem, including the Old City, since 1967, all religions are respected.  And even though Muslums do not allow non-Muslims to visit the key Muslim sites (the Dome of the Rock and the Al-Aqsa Mosque) even though they are built on top of the rubble of the ancient Jewish Temple that once stood on the same spot, Muslims are free to visit the Jewish holy sites, and do so every day.

It was only 5 years ago the the main Synagogue in Jerusalem, destroyed by the Jordanians  in 1948, was finally re-built.  Under the circumstances, it’s not surprising that most Israelis aren’t interested in “sharing” Jerusalem with Palestinians, many of whom helped the Jordanians expel the Jews and destroy the Jewish quarter of the Old City in 1948.

Can you imagine if Canadians came to NYC 67 years ago and destroyed all the synagogues and killed or expelled all the Jews from Manhatten?  After finally winning back Manhatten 19 years later, would we trust them today, if they “promised” to be good this time even while they continued to preach that the only good Jew is a dead Jew?  The question answers itself.

Now back to the Via Dolorosa ( also called the “Stations of the Cross”).

At station 1 (where Jesus was condemned by Pontiius Pilate), there is a courtyard and a small chapel.

At station 2 (where Jesus was given the cross to carry to his own crucification) we ran into an Armenian shop owner who lives in peace and harmony with the Muslim elementary school upstairs.  He brought us through the school to an upper courtyard with a beautiful view of the Dome of the Rock (which is sacred to Jews, Christians and Muslims as the place where Abraham proved his faith to God by his willingness to sacrifice his son Issac; and again to Muslims as the place from which Allah, in a dream, may have ascended to Heaven to receive the Koran). 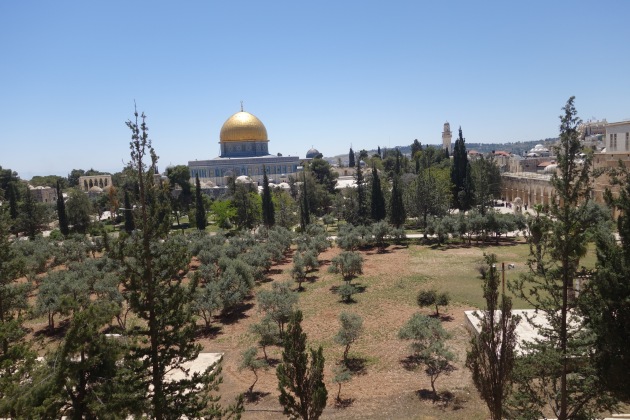 We then spent time with the Armenian merchant in his shop (the “Palace”) and made a purchase.

Although many of the 14 stations of the cross are based on tradition and not biblical text, all of the stations are followed by most groups of Christian pilgrims.  Some groups gather, carry a cross and pray and sing while making the trek.

Ari did a great job of leading us and sharing the history and perspective of each of the stations until we reached the final stages which are all located within the Church of the Holy Sepulcher.  Jim even got to touch and pray at the place where, according to centuries old legend, Jesus was laid to rest on a flat stone following  the crucifixion. 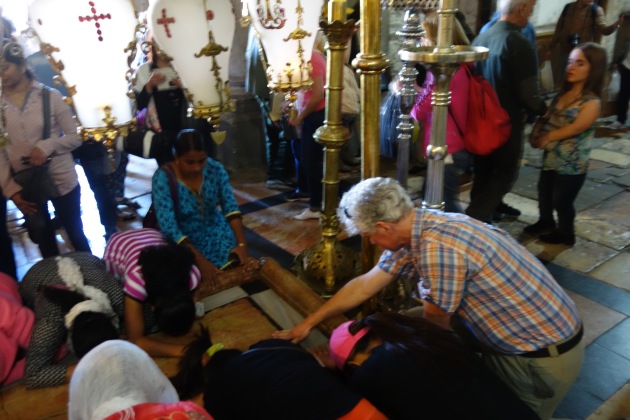 As we looked above the final station (the tomb of Jesus), sunlight was streaming in the oculus at the top of the domed ceiling.

We ended our tour at the Jaffa gate, and then decided to leave Old City to find a quiet restaurant.  Choices are limited on the Sabbath in  Jerusalem, but we lucked into a table at Mona, a lovely restaurant near downtown with yummy food.

The cold weather has finally left Jerusalem so it as warm enough to watch the sunset from the hotel’s 3rd floor sundeck.  A few miles away, near the Mount of Olives, we heard gun fire and saw black smoke.   No one seemed to notice or care. But we learned today that there were three violent incidents around the city culminating with Molotov cocktails thrown by terrorists at Israeli police cars at the Mount of Olives (which is the hill directly east of the Old City).

So today we had to skip our tour of the Christian shrines on the Mount of Olives, and instead went Immediatley to the “Ramparts Walk” high along the top of the outer walls of the Old City. 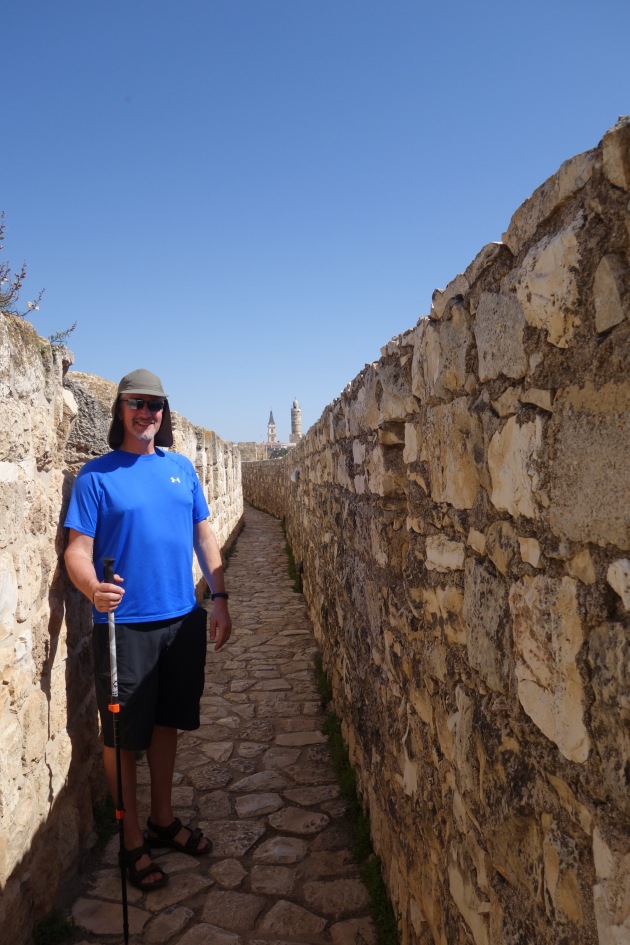 This is something most people don’t do, but I highly recommend it.  It was just us and a few small church groups (including a very sweet Danish church group reading from the Bible, singing hymns and trumpeting with shofars). 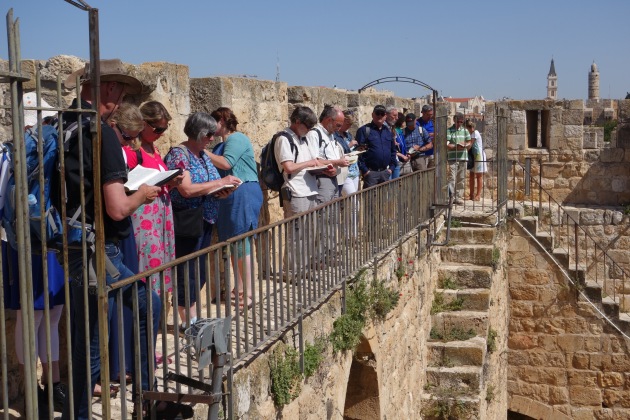 From there we explored the one part of the Western Wall where there is no gender segregation so Jim and I could visit it together.  It was peaceful and virtually empty. 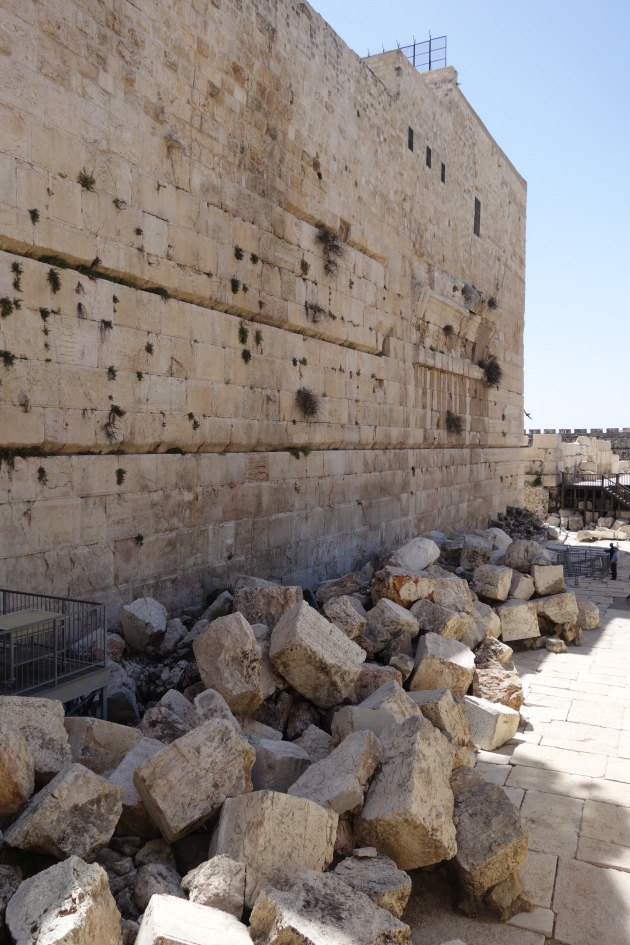 On our way there, we passed a joyful Bar Mitzvah procession complete with dancing and music.  I wish I heard more music around the Old City.
We continued our historical exploration in the ancient “City of David” which lies below and just outside the “more modern” Old City. This is a huge archaeological site that exposed the original, underground spring that has provided Jerusalem with drinking water for over 3,000 years.  It’s an amazing place.  Other than groups of local students there are very few tourists.

From the bottom of the City of David you look out and up at the Mount of Olives and the now Arab area of East Jerusalem.

Unfortunately, almost all of the homes in East Jerusalem were built on top of ancient Jewish tombs during the Jordanian occupation of 1948-1967.  In a just world this area would be returned and the sanctity of the ancient Jewish tombs reestablished within a park.  This could be done by building new apartments elsewhere in East Jerusalem for the Arabs currently living on the lower slopes of the Mount of Olives.

We even passed Olive trees that were over 1000 years old.

From the amazing tour of the ancient spring that was the life blood of the City of David,  we walked underground back to the Old City through a narrow and now dry aqueduct built by Herod around 20 BC at the same time he built the Second Temple.  From underground you can see the giant stones that fell onto the aqueduct during the destruction of The Second Temple by the Romans in 70 AD.  The aqueduct comes out close to where we began our tour near  the original base of the Western Wall of the Second Temple.  Some of these stones are mammoth.

We ended our tour for the day in the City of David Musuem, next to the Western Wall, which has some good videos and displays. 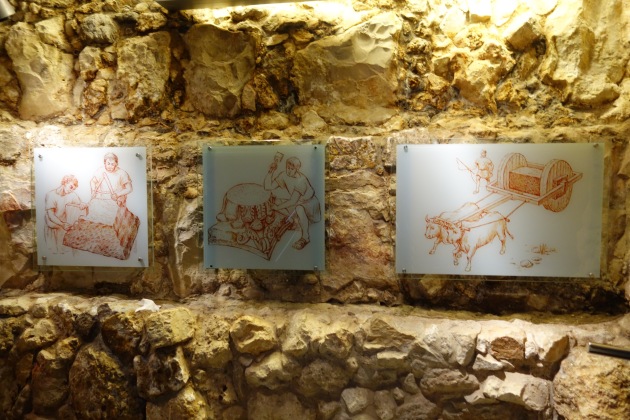 By this point we were exhausted and starving.  I chose Falafel and the guys chose Shwarma from a great little restaurant in the Jewish Quarter.  Once back in our magic van we drove briefly out to a view overlook of Bethlehem (which is just a few miles from Jerusalem) and the security wall protecting Jerusalem from snipers and suicide bombers. This part of East Jerusalem is considered an “illegal” settlement according to the UN, which is ridiculous.

Our tour of Jerusalem is now over.  Tomorrow we head out for a long day trip to visit the Dead Sea and Masada.