Princess Louisa Inlet is rugged and dramatic.  The rapids, waterways, eagles and mountains surrounding Dent Island are exciting.  The Octopus Islands, in contrast, are calm and peaceful.  They are a series of small low islands that make up a British Columbia provincial park just west of the Hole-In-The-Wall tidal rapids.  We were unable to come back here last year because we lost our anchor in Bute Inlet and had to “dock-hop” back to Seattle.

With two anchors on board this time, we chose the same spot we used two years ago.  We also chose to use our stern anchor instead of a stern tie to keep our boat from spinning with changes in the wind and tides.

We did so much yesterday.  Our day began with our pre-dawn contact with a floating tree in Mermaid Bay followed by fishing and napping.  Then we headed out for Calm Channel turning down the channel heading to the rapids at “hole-in-the-wall guided by an Osprey.

We then anchored at our previous spot at the Octopus Islands and went kayaking.

Time for fishing again – this time for salmon.  Doug (Jim’s brother) and his employee Shawn at Doug’s Boats and Sports had set us up with everything we needed to fish.  So we headed out on the dinghy to waters nearby where we had seen other people fishing.  I remembered most of what Shawn had told me about setting up the lures and tying them.

Our test run was successful in the sense that we had a good time and didn’t lose anything or stab ourselves (or each other) with khooks.  We did seriously tangle our two lures together.  First fishing lesson learned: our dinghy is too small for two fishing poles.  And we didn’t catch any fish.  Good thing I had defrosted a rack of lamb, which we later ate for dinner (deliciously grilled).

After dinner we took the dinghy out to watch a mellow sunset befitting the peaceful energy of the Octopus Islands.  We came back to the True Love and did a little cleaning and vacuuming. I took out some Trader Joe croissants from the freezer to rise overnight.

The Captain got the satellite phone to work and we called Walt to check in.  Dick hadn’t been feeling well lately, but Walt said he was doing better and we toasted his improved health.

It was a full and wonderful day and we both slept well and long.

We lazily woke to low marine clouds and popped the fluffy croissants into the oven.  The Captain/Barista made lattes and combined with some healthy elixirs we had a filling and delicious breakfast.  Jim and I are pretty addicted to “Words With Friends” on our i-phones.  But, with no internet and no cell service we pulled out the old scrabble board and began a game that we played on and off all day between fishing (no tangles, but also no fish), sunning, reading and kayaking. 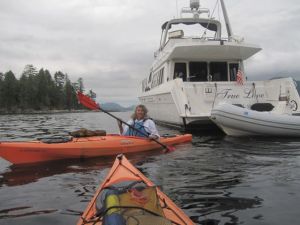 Tomorrow we plan to leave after lunch to head for our first-ever navigation through Beazley Passage, a narrow rapids at the south entrance to Okisollo Island. We are heading towards Gorge Harbor for the night – an anchorage recommend to us by Jack and Ruth.  This begins our transit south back to Seattle.

We have a week to get home and plan to include our first stop in Victoria (the capital of British Columbia at the south end of Vancouver Island) on Tuesday.

We haven’t used our satellite TV much this trip, but we will watch the opening of the Olympics tonight.  During the 2010 Winter Olympics we had a great time visiting Vancouver, BC.  Although we aren’t in London for the 2012 Summer Olympics, we will be there is spirit, marveling at the athletes who seek to prove that they are the best in the world at what they do.