Our voyage to Desolation Sound was easy but cloudy.  We stopped in Lund for provisions at 5:00 PM and then headed to Tenedas Bay to anchor for the night.  Saul did the stern tie from the kayak, which was an innovation.

Simon and Jim settled in with a beer to watch assuming there would be great entertainment, but Saul smoothly kayaked out and tossed the rope over the Madronna tree on the first try. 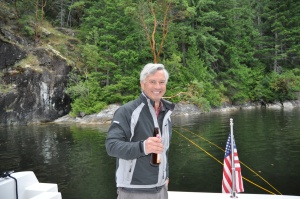 Last night was a hoot!  We mixed cocktails and began with a special appetizer we had tried years ago in Key West:  dates, wrapped in crispy bacon, pan sautéed on the grill with orange marmalade sauce.  Yum!  They didn’t last long, but a delicious dinner of steak, pot stickers, and fresh salad with radishes, avocado and mango followed.

We continued to share libations while playing bridge.  Jim and Saul against Simon and me.  Simon hadn’t played bridge in a while, but he hadn’t lost a step.  Simon and I entered the last hand of the night 1200 points ahead.  Saul and Jim had to win a slam doubled to beat us.  For you bridge players out there, Jim bid 1 heart.  Saul had 6 hearts in his hand.  He bid 6 hearts.  I doubled and they made 7!  It was spectacular!  If Simon and I had to lose that was a fun way to do it.

We slept in and set out this morning for a tour of Desolation Sound and beyond. The clouds were higher in the sky when we woke up this morning and we made bets on the time for the sun’s appearance.  The times varied considerably between 1:30 and 4:00.

This was “communication dysfunction day” for the Captain and First Mate.  The Captain had a “particular place in mind” and the First Mate wanted downtime near the Kenmore Plane pick-up point at Dent Island on Wednesday.  We both thought the other had agreed to the each other’s plans.

Saul commented that although Jim and I have a remarkable ability to communicate and work together closely in bliss most of the time, when we don’t it’s like two currents rushing past each other at top speed creating whirlpools of unpredictable energy, like the eddy’s in the rapids we were navigating today.  So true!

But like the rapids in the always-changing tidal currents, the water’s calmed and we (with the help of some decisive intervention from Simon and Saul) ended up in Mermaid Bay on the west side of Dent Island. The clouds cleared, bathing us with the much-needed warmth of the sun at 4:00.  We were safely anchored (including another shore tie) in a magical place resting on the bow of the True Love, listening to the rapids and watching the eagles in the sun. 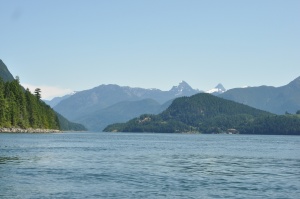 Saul deployed the crab pot again, this time using chicken for bait.  The First Mate made our first small plate of capresse and we sunned on the bow like seals warming on a big rock.  Simon used the extra clams we saved from the previous night to make our second small plate, a delicious clam pasta dish.

The men are now out on another dinghy adventure, exploring the area, possibly stopping by the bar at the Sonoma Island Resort while the First Mate enjoys some alone time.

Tomorrow we should have a quiet morning where we don’t have to move anywhere before we drop Saul and Simon off at the seaplane just a few minutes by tender from where we are anchored.

The men returned right before dark.   They saw over 20 eagles at sunset on a small island nearby and then attempted to get a drink at the Sonoma Island Resort.  The bar tender was horrified that they weren’t guests.  People cannot just boat up and enjoy the facilities.  Guests only.  First they were given a tour and then they were escorted from the premises.

After the men returned, we enjoyed some more bridge and scotch.  Saul and the First Mate were partners this time against Simon and the Captain.  What can I say?  I had great cards and Saul and I were victorious.

Before going to bed we went out to look at the stars.  Saul said he had forgotten how many stars were in the sky.  The Milky Way was bright and clear.

This morning we slept in and woke to warm sunshine.  What a change! Around 11:30 we headed over to Dent Island.

Everyone agreed that although Dent Island didn’t have all the fancy facilities (the indoor tennis court, the heated pool, the game room with 3 video golf screens, etc.) its simple elegance was far superior.  We enjoyed a scrumptious lunch while we awaited their flying chariot.  Not a bad way to travel.

We all had a wonderful time together.  It was the Captain and First Mate’s great pleasure to share some the beauty and magic of this beautiful area with our son and one of our best friends.

The Captain and I did some eagle photography this afternoon,

sunbathed on the bow and napped.  Tonight we went back to Dent Island to share a lovely dinner together.  We have enjoyed all of our guests but are looking forward to the next week alone on the True Love.

The Captain and the First Mate of the True Love